Toremifene citrate is an anti-estrogenic drug, specifically classified as a Selective Estrogen-Receptor Modulator (SERM) with mixed agonist and antagonist properties.

It is a non-steroidal triphenylethylene derivative, similar in structure and action to both Nolvadex (tamoxifen citrate) and Clomid (clomiphene citrate)

Toremifene citrate is used for the treatment of breast cancer in postmenopausal women with estrogen-receptor positive or estrogen unknown (unsure if the cancer is estrogen responsive) tumors.

It works by attaching to the estrogen receptor in various tissues in a competitive manner, blocking endogenous estrogen from exerting biological activity.

As an anti-estrogen in many tissues, male bodybuilders and athletes may use toremifene citrate to counter some of the side effects associated with the use of aromatizable or estrogenic anabolic/androgenic steroids.

This may include gynocomastia, body fat gain, and increased water retention Toremifene citrate for steroid users is its ability to increase the production of luteinizing hormone and follicle stimulating hormone, and therefore increasing testosterone.

This ability is why it is often used by steroid users during their post-cycle therapy.

Toremifene citrate would accomplish this by blocking thenegative feedback inhibition caused by estrogen at the hypothalamus and pituitary, and this in turn will help to increase the production of these hormones. 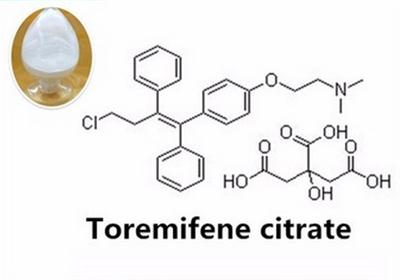 It has already been covered that Toremifene is a SERM, and serves to block Estrogen at various receptor sites in certain tissues within the body (breast tissue in particular). As a layman explanation, Toremifene pretends to be a 'fake' Estrogen that occupies Estrogen receptors within breast tissue. With these receptors occupied by Toremifene, real Estrogen cannot perform their jobs there. Toremifene does not reduce total blood plasma levels of Estrogen. In addition to being antagonistic to Estrogen receptors in breast tissue, it is also antagonistic to Estrogen at the hypothalamus gland (this essentially 'tricks' the hypothalamus into thinking there is little or no circulating Estrogen levels in the body, causing it to increase its manufacture of Testosterone so that it can utilize aromatization to restore these levels.

Toremifene is also agonistic to Estrogen receptors in other tissues in the body (within the liver in particular). This means that whileToremifene will act as an anti-estrogen in breast tissue and the hypothalamus, it will act as an Estrogen within the liver. This can have beneficial impacts especially during an anabolic steroid cycle, such as improving and shifting cholesterol levels into a more favorable range.